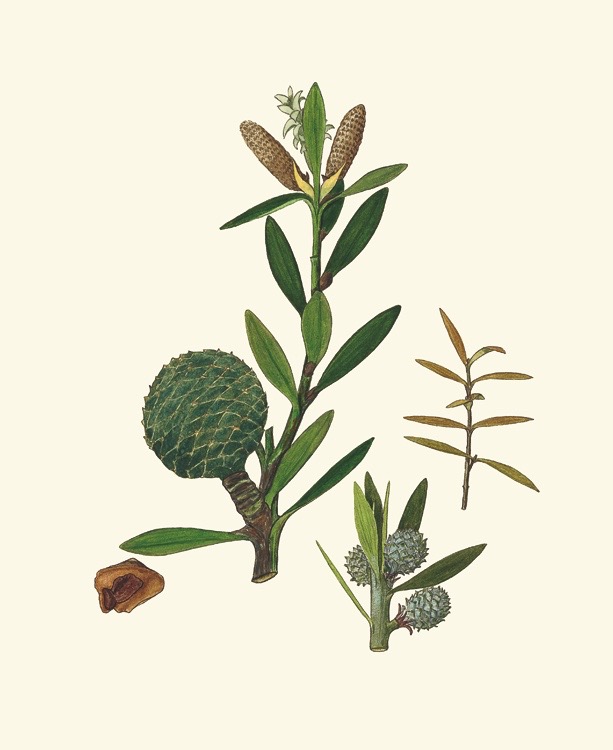 Kauri, scientific name Agathis australis, belong to the Araucariaceae family. They are one of the world’s largest trees and have an ancient history.

Hundreds of millions of years ago Araucariaceae evolved cones in which their seeds could grow, steadily accumulating the sustenance and protection that would maximise their chances of dispersing the seed so that a new generation would grow successfully. This process was so successful it was adopted by the whole family of trees we call Conifers, the cone bearers. While these have subsequently been superseded in number and range by flowering trees, the Angiosperms, the Conifer family, includes both the largest and oldest living things on the planet.

Conifers can have either, or both sexes, on the one tree. The Araucariacea family have both male and female cones on each tree. The male cones produce pollen that fertilises the female cones, either on the same tree, or more likely on a neighbouring one.  The female cones will produce ripe seed a year after they are pollinated. The wind helps pollinate and disperse the seeds.

Kauri Dieback Disease is caused by Phytophthora agathidicida, also referred to as PA. The spread of this pathogenic fungus is the greatest single threat to kauri survival. We have systems in place to prevent the spread of the disease and are working with local authorities to monitor local infection sites.

Following DNA studies, this fungus-like disease was formally identified in 2008 as a distinct and previously undescribed species of Phytophthora.

Phytophthora agathidicida attacks through microscopic spores in the soil that infect kauri roots and damage the tissues that carry nutrients within the tree. Infected trees show a range of symptoms including yellowing of foliage, loss of leaves, canopy thinning, dead branches and lesions that bleed gum at the base of the trunk. Nearly all infected kauri die. So far, kauri dieback has killed thousands of kauri in New Zealand.

Scientists are currently working on control tools for this disease but there is no known cure at this time.

Support us by making a donation or volunteering your time